WAYNE: I’ve been building bikes for 25 years. I don’t really have a shop as such; I do it more as a hobby. I currently have 20 bikes in my shed at home; three are mine and the rest I’m working on.

Mardi: When I married Wayne he was into bikes and it became a passion of mine too. I asked him to build me a bike. We bought a second-hand Santee frame and it eventuated from there.

He started by polishing up the motor, and as he was putting it together, he just pictured how he wanted it—and this is the end result.

Wayne: It’s a 1993 Evo motor. It was all black; I had to pull it apart, bead blast it, polish it; did some flowed work on the heads, installed an EV46 cam, reconditioned the carby, and put it all back together.

I also reconditioned a four-speed Shovel gearbox with Andrews gears. It is both electric and kick start.

The upswept fishtails are from Custom Chrome.

My mate Mick did the painting; the murals were done by Octane Art in Cairns.

Mardi: I chose the colours: candy apple with a pink pearl; and we’ve got the pink pearl over the white frame too. I just wanted something to stand out.

Because the colour is so pretty I didn’t want flowers all over it; I wanted something to break up the niceness of it, I suppose. The artist pictured white demons and I said, yeah, that’s it, and left it to him. When I walked back into his shop, I was really happy with it.

Wayne: I knew about the Bankstown Custom Bike Show in Sydney from magazines so this year we decided to drive down and enter the red rigid.

Mardi: We’ve taken it from Cairns to Mackay a few times for bike shows, but this is the furthest we’ve taken it, to Sydney.

Wayne: We’ve won approximately 18 trophies since it was first registered six years ago. It’s held its ground over the years. It’s a timeless design.

Mardi: It is registered and I have ridden it around Cairns where we live, but it’s more a show bike. As you can see, there’s not a lot of stone chips on it—it is a rigid, after all.

Words by Wayne and Mardi; photos by George 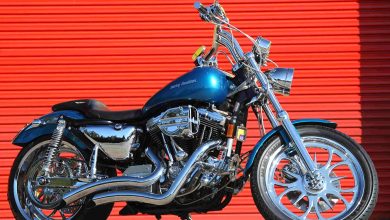 Harley-Davidson Sportster Blue Me Away