“I’ve always wanted a Harley but never could afford one nor could I decide which model I wanted. One day I was out riding with a mate of mine and we came across this semi-built chopper that needed some TLC at Townsville Custom Cycles. I walked in, spoke to the owner of the shop, we agreed on a price and I took it home.

“Now the big job started. Considering that I work as a FIFO and am only home for short periods of time, I had to sort out parts quickly, and at times not everything went according to plan. I had to find a motor, transmission and primary, let alone all the other small parts. Lucky for me I was put onto Spanner from RHD Classic Supplies who saved the day and took on the job of totally rebuilding the chopper from the ground up. Spanner is a good friend and a good mechanic. It was time consuming with all the problems occurred and changes we made to the chopper.

“Now came the time to decide what paint work to have on the chopper. I was put onto a very good friend of Spanners, Yipo from Yipo’s Airbrushing, Townsville, Queensland. I told Yipo what I had in mind—Angels and Demons for my deceased parents—and Yipo did the rest. Demons are the diseases the eventually caused my parents passing and the Angels are the ones now looking after them in Heaven.

“By this stage I’d moved from Townsville back to Brisbane. Once the chopper was finished, I had it transported down to Brisbane.

“Like I said before, not everything goes according to plan and I ran into a few more problems—it wasn’t running right. That’s where a good mate of mine, Joe from Taverner MC Repairs, came into play. Joe put his expertise to work and changed, replaced, tightened and adjusted parts until he got the chopper running like his own baby.”

Redemption is a custom-built chopper utilising a Godfather frame with a 44-degree of rake on the front-end. It’s powered by a TP 121 Pro-Series giving out 120 horsepower and 125 foot/pounds of torque with a Mikuni 45 mm carburettor.

Transmission is six-speed, right-side-drive Ultima which receives the revs through an Ultima primary.

A Dakota digital speedo lets Mario know when he’s going too fast and a set of custom-made Burleigh Bars keep everything aimed in the right direction.

A Vance & Hines, Big Radius, 2-into-2, chrome exhaust system dispenses the spent combustion nice and loudly and the clean air is drawn in through a Spike air-intake filter.

“For now I’m just enjoying riding the chopper and maybe later on might do some more modifications.”

Words & photos by Chuck U Farley 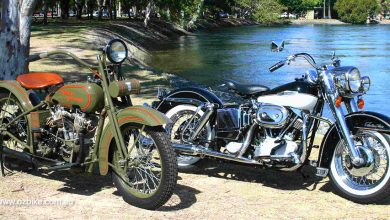 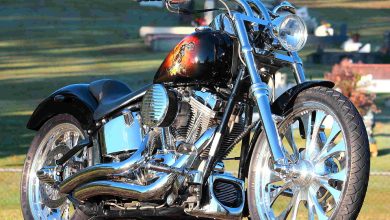 Bat Out Of Hell Softail Standard 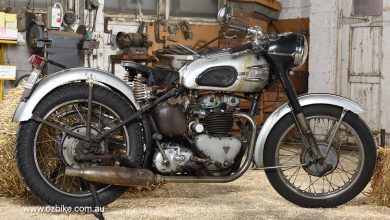