The frame’s the only Harley thing on the bike that’s original factory. It’s a 1974 frame stretched to accommodate the bigger motor, and bowed and raked.

The arse-end has been widened, originally to have a 200 tyre put in it but it was a bit hard to maintain because it was chewing up guards and there wasn’t enough room for the chain to run so we backed it off to a 180. In its day, it was a fat tyre, but now a standard Harley comes out with a 180 so it’s not a big deal anymore.

Trying to keep up with the boys around town, especially the ones on Buells and more sporty bikes like Dynas, it’s quite difficult, quite challenging, but I was that far ahead of them I had to have a handicap to bring me back to the field… ahh, that’s bullshit. You’ve got to take slightly different lines when you corner, much like the difference between driving a family sedan and a light truck: slightly wider cornering. It’s actually more stable at high speed because of its long wheelbase so at high speed it’s actually safer in a straight line than a short wheelbase. But any sort of cornering or braking quickly or accelerating quickly can become a little unstable.

I quite like the challenge. I quite like the fact that it is a bit harder to ride. The only time it’s annoying is days when we’re moving it around a small area, and slow speed cornering; it tends to fall a bit rather than rolling; it falls once it gets past a certain point. But if you’re going fast enough, you don’t notice it.

The bike had too much power and twisted and tore out the original swingarm and sprockets and basically everything from the back seat back, which was quite amusing because I was at the front of the pack when that happened. A couple of the boys almost ran me over. Luckily, they had enough room to do a u-turn and have another go. I didn’t quite go down but it was close. I slid and put the bike down.

Bendigo Custom Cycles helped me with the rear-end. They pre-fabed the swingarm, welded the shocker mounts and fixed up the back-end so it ran true.

I got the exhaust custom made to suit the specs of the bike.

The wheels are custom aftermarket, Arlen Ness style. I’ve changed quite a lot of things since I got the bike but they’re only little adjustments you probably wouldn’t notice, just to make it better for me. Like it used to have ape-hangers which were quite tall and they looked fantastic — until I discovered that holding the ape-hangers I couldn’t reach the rear brakes. So it might not work having nice ape-hangers if I’ve got to redo the paintwork because I’ve ploughed it into something. I put smaller bars on it so I could sit further forward and operate the brakes.

When I first got it, it didn’t have a rear seat so the missus sat on the back with a pussy pad that was on suction cups — which she didn’t enjoy. So we went from there to a rear seat, and then we got a bit older and a bit softer and she wanted a sissy bar so I put that on — which spoilt the lines of the bike, but what do you do? It’s about the second smallest sissy bar you can get but it still ruins the line, but if it wasn’t for her, I wouldn’t be able to afford to keep repairing the fucking thing so I’ve got to make some concessions.

I’d like to thank my bros for being so patient because when the bike was first put together, it was with the idea of being a show bike. Then I got hold of it and modified it and wrung its neck every day. I had to change parts for parts that were more conducive to hard work and hard wear, and the experience of finding out what will break and then replacing it with something that won’t break took a couple of years and the boys were a bit frustrated with lifting it onto the back of utes and trailers.

There’s little things you fall for when you build something that you might not notice: the exhaust was up against the cover where the electronic ignition goes in — it was just touching — which caused a heat sink which blew my electrics and my CDI. That was cured by just putting a screw driver on the edge of the pipe and hitting it with a hammer so there was 2 mm clearance and the air flows through and the electrics don’t overheat. But until you run something like this after it’s been built from scratch, you don’t discover it until it goes wrong. So again, I’d like to thank my brothers for their patience.

Another good thing about it that I really enjoy is because of its weight and the length of it with the long wheelbase, it’s very hard to get the front end up. So even though the motor’s got a ton of power, you feel confident snapping the throttle and releasing the clutch and it’s not going to flip on you — it just stands up and goes. So it’s like having flip rails on it. I could get better performance from the S&S engine using a six-speed but I chose laziness over performance. 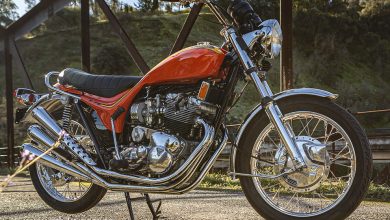 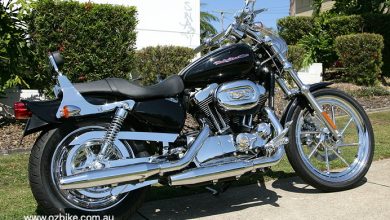