I REMEMBER one day when we were all hanging around outside Howard Hughes’ place in Pittwater Road, North Manly. Howie had lived there with his parents until they sold up and moved on, leaving him there. It sounds pretty callous, but everyone was happy with the arrangement… except maybe for the new owner. See, in the deal his parents made with the new buyer, Howie was supposed to stay there rent free while painting the house and just generally doing it up. Howie’s nickname was bestowed upon him because he reminded us of Howard Hughes, the billionaire recluse (just the reclusive part — not the billions). The house was more of a hovel, and in truth, scant restoration occurred, and Rocky, me, and a number of other assorted freeloaders, were well and truly taking advantage of the free rent part.

This particular day we were all on a mission: the mob was heading up to Skraps’ place to pick up Howie’s new bike. Bikes were strewn across the footpath, the driveway and the first lane of Pittwater Road; Skraps was there on his Triumph TR7, me on my John Player Norton, Rocky on his WLA bobber, and Demon on his Suzuki water-bottle. We were mustering for the ‘off’.

The bike Howie was buying from Skraps was a 1970 Norton Mercury 650 Twin, the last model from Norton that featured the legendary Featherbed frame.

Deaf Mick had owned it years before; he’d acquired it via a bit of horse trading, before passing it on to Kevo in about 1975 for just $200. I recalled helping Kevo to get the five-year-old rust bucket going, unsuccessfully I might add. We had spark at the plugs, oil in the motor and petrol in the carby via a remote fuel can which bypassed the dry, rusty fuel tank. It was technically ready to roar into life, but… it was missing a kickstarter pedal. And both tyres were dead flat, so there was no push-starting on the horizon. With no compressor and no hand-pump and the local pub calling our names, the Norton was pushed to one side and forgotten.

Kevo sold it to Skraps for about $300, Skraps sold it to Rocky, who promptly sold it back to Skraps, who then sold it on to Howie for $400, and I helped Howie do it up and finally get the thing back on the road where it belonged. I even bought it off Howie many years later.

But there we were on Pittwater Road, ready to go and pick up an old Norton in an even older Morris J Van, which served as the ‘luxury’ race transporter.

Howie was sitting in the driver’s seat of my J Van, calling out to his faithful hound to get in. Boss, the white Bull Terrier, was as thick as shit in the neck of a bottle and twice as nasty, but he was bloody fantastic dog, that’s for sure. And with typical Bully temperament, he was only going to get in the van when he was good and ready.

One by one, the old British and American bikes were being kicked over, whereupon they’d roar into glorious, full-throated life. Demon’s bike wouldn’t start, and it was the only Japanese one there, which was very smirk-worthy for a rider of ancient British machinery.

Demon’s machine was one of those weird Suzuki 750 water-bottles, a triple-cylinder, water-cooled 2-stroke. “Gi-gi-gi-gi-gi-gi-gi-gi”, it went as Demon stabbed the starter button. “Gi-gi-gi-gi-gi-gi-gi-gi,” it went again, but the bastard just wouldn’t fire up. One by one, we killed the motors on our older, less Japanese machines and waited while Demon coaxed the recalcitrant mongrel some more.

It was all quiet again so you could really hear Howie’s command to the Boss Dog. “Gidddeere!” he yelled, and the dog finally assented and began to step up into the van.

The Morris J Van has sliding doors so it was easy access for a cumbersome dog such as an English Bull Terrier. Boss Dog was just giving that funny, waddling half-skip that Bullies do when climbing stairs, half in and half out of the J Van’s left passenger side door when Demon gave his starter button one more assertive press.

We were expecting a “Gi-gi-gi-gi-Brang — braddabrang!” if the two-stroke-triple-cylinder engine ever fired into life with its three-into-one exhaust system. But it didn’t do that at all. It went: “Gi-gi-gi-gi-Ka-friggin-BOOOOOM!” The marginal baffle blew right out the end of the exhaust system, shot about 6 meters straight out and hit Boss Dog right in the arse!

“Ba-wooo-wooo-wooo,” Boss yelped as he came barrelling out of the van’s door at warp speed 5, howling and barking and running in circles on the footpath.

We were all shocked, but not as half as shocked as the Boss Dog was. He ran hither and thither, round in circles and up and down the footpath, only occasionally stopping to give the front mudguard of the van a damned good nip.

We all laughed, although we kept the amazed looks on our faces because the baffle had left a round, black, sooty mark on Boss Dog’s right hindquarter.

Once Boss Dog began to calm down, quiet returned to Pittwater Road, but there was still inordinate amounts of fibreglass muffler packing wafting down from the now polluted sky.

When the laughter subsided, we inspected the damage and post-mortemed the incident. Demon’s three-into-one exhaust system must somehow have become totally blocked from the time he parked the bike until an hour or so later when he tried to start it. Lord knows how, Lord knows why, but the baffle finally let go after three annular rivets had ripped through the muffler pipe’s metal to blow the baffle out. Man, that must’ve been some pressure build-up! Even after that thorough inspection, we never found out why, but it did take some months before Boss Dog would go anywhere near the Morris J Van, let alone get inside it. 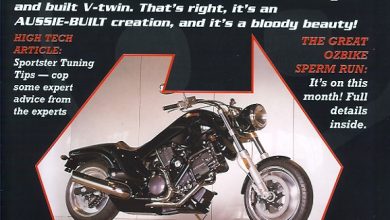 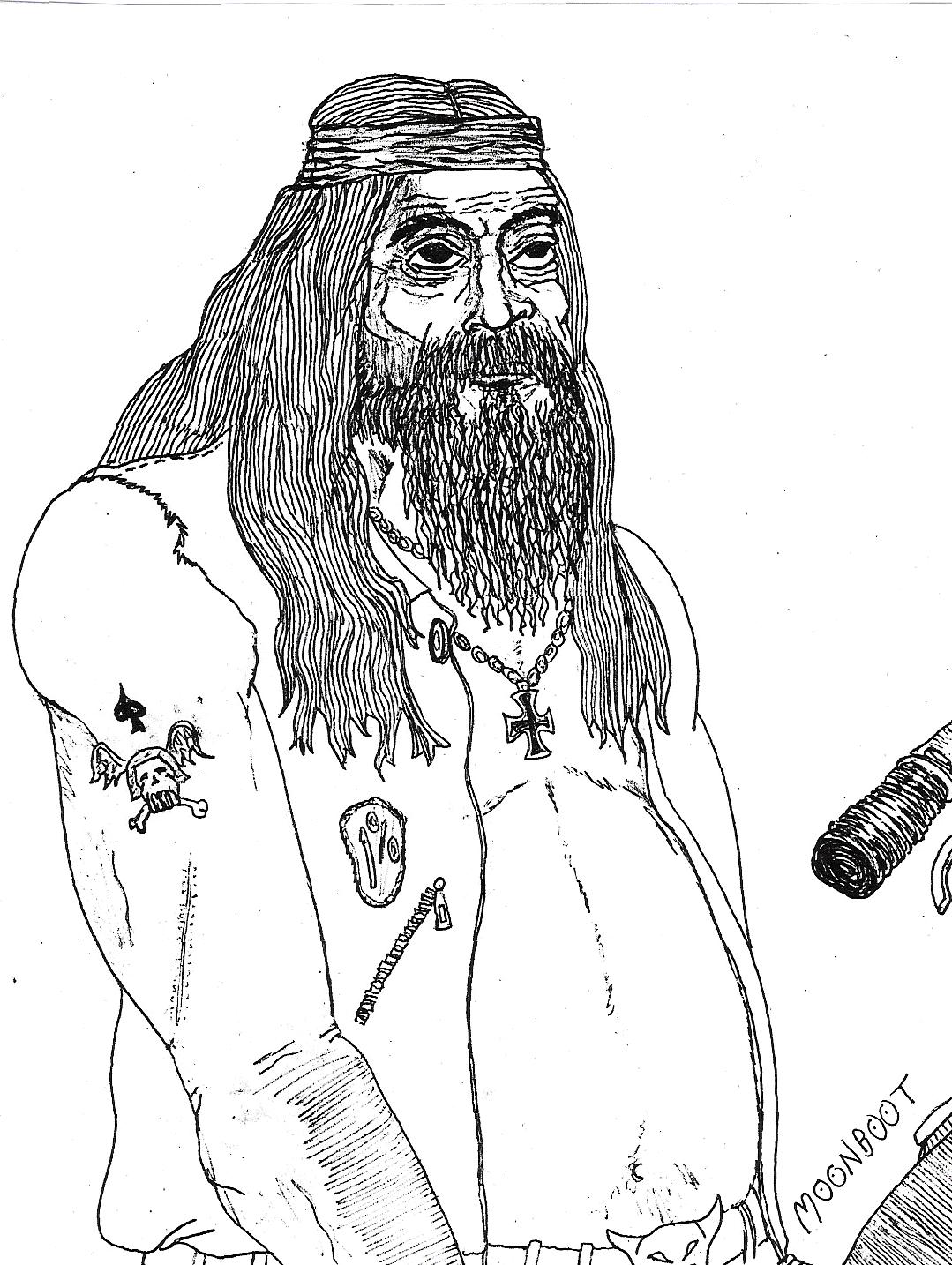 The Patch Upon his Back