NOT LONG ago my Softail spat a belt. Now ordinarily that’s a big enough nuisance by itself, not to mention the many dollars for parts and labour to fit a new one. My situation was even more complicated as I had fitted a wider Deuce wheel to my bike, necessitating a narrower belt.

So, I had in my possession a second-hand 1.5 inch wide belt with a nick on one side. How to cut it down in a controlled process?

I worked on the designer’s premise of at least 2x in a safety factor. That is, if the width of the standard Aramid reinforced belt was 1.5 inches, then reducing it to 1 inch still left me plenty of safety factor.

Too easy— just remember to cut the excess from the side with the nick in it!

A jig to locate the belt and stabilise the cutting blade was in order. Scrounging around in my off-cuts of steel I came up with a piece of channel and a section of pipe which, after much head scratching, were duly welded together. The width allowed the belt to be guided and slide through. The radiused section of pipe allowed a lead in so the teeth on the belt wouldn’t catch.

Basic hand tools required plus an arc welder and angle grinder with one of those ‘u-beaut’ thin cutting wheels.

Next I tack welded a piece of 25 RHS to the pivot to give me something to attach the cutting blade to.

Now weld on a couple of nuts to attach the cutter adjusting screw to the jig.

This set-up will give me control of the cutter. It’s all removable to fit over the belt.

Make up a clamp plate for the cutting blade – I’ve used a replaceable knife blade. Now drill and tap some holes in the cutter arm.

Voila! What a set-up—nearly as good as a bought one! You can see that I have used a packer behind the blade to accurately set the width of cut.

The belt is pulled through by hand and the adjustment screw regulates the depth of cut. About three times around the belt to cut right through doesn’t force things.

Now the fun part starts. Pulling out the back wheel and swingarm. Removing the clutch and primary drive and the inner primary. Why oh why does Harley have such a user unfriendly archaic system?

Tech article by Stewie from Albury

PS: I got more than 80,000 km from the last one I cut (often riding two up with luggage) so it is reliable. But you know belts, they can break seemingly without reason! Convert Your Harley-Davidson Sportster to a Road Racer 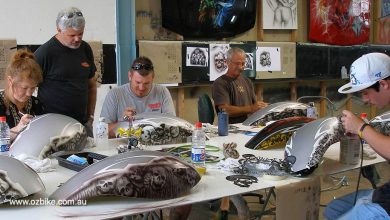