TAMA (or T for short) has owned this bike for five years; 12 months of those five years saw the bike go through an amazing transformation.

The motor and gearbox were fully rebuilt by The Grunt Factory. A later model top-end was fitted and the donk has been bumped up to a beefy 1430 cc.

An enclosed belt now transfers the power from the motor to the gearbox and a chain drive was employed on the rear so a wider arse-end could be fitted without all the hassles of off-setting the drive train.

The frame was literally cut to pieces and then re-assembled to give the bike that long low boulevard cruiser look. This task was left in the capable hands of Pommy Nick at Niccon Engineering, Slacks Creek. He is also responsible for the stretched fuel tank, guards, oil tank, 42-degree rake, and that awesome moulding which makes each component seem to flow together so well.

The handlebars are a work of art in themselves and the in-built Dakota digital speedo keeps things nice and tidy in that department.

The wild paint job was laid on by Stewy at Ultimate Airbrush; the end result is fantastic! With its crimson red razor wire design on the bright white base, it highlights the extensive moulding on the bike and compliments the sharp edged theme. Attention to detail is in abundance here with the coils even getting the same paint scheme.

The ostrich skin covered seat was made by Muzza; it sits nice and low and doesn’t interfere with the lines of the bike.

The final assembly was left to John’s Customs at Currumbin and the electrics were handled by Holga.

Thanks go to T and Sherree for their help on the day and to the lovely Kerri for modelling for us. Great bike, top people, and a shit-hot day for a ride down to the coast.

feature by Chuck U Farley 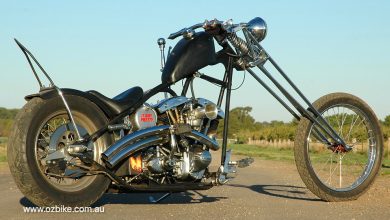 Holy Shite! I Bought a Trike—Part 1 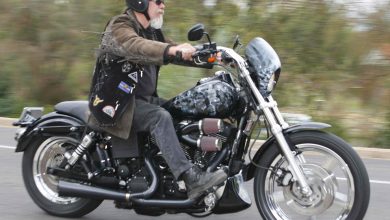