Last issue we were able to get the basic lower-end of the project engine completed to a stage where the remainder of the build will be straight assembly work; in other words, there is no more machining, all the bore stroke calculations are done, pistons selected and cylinders sized to suit.

Although the Knuckleheads are brand new ‘V Twin’ items, they will be dismantled for inspection, cleaning and painting prior to installation.

Also for this issue, we decided to add the cylinders to protect the conrods and the aluminium bores of the cases.

At this stage we will concentrate on what is involved in bringing all the basic items together—the Knucklehead engine, the Spyke six-speed transmission with the genuine H-D primary drive and chaincase.

This is a high quality Santee frame, a reproduction of the frames that Harley used between 1936 and 1957. It is not a replica frame as such because it is constructed entirely differently. All the engine and transmission mounts are dimensionally identical to the Harley frame and all big twin engines will bolt straight in. There’s a slight difference with the Knuckle and sidevalve engines as the front engine mount requires a spacer, but as the S&S crankcases that we are using are machined to Panhead/Shovelhead specifications, this will not be a problem.

The only modification to the frame at this stage is the removal of the tube and brackets for the mechanical rear brake crossover shaft assembly which will be unnecessary with the super trick hydraulic rear disc brake earmarked for this project.

This frame was originally intended to accept a four-speed transmission with its respective mounting plate. An aftermarket five-speed transmission mounting plate was chosen as the starting point to shoehorn the six-speed tranny into position. The plate did require some modifications to clear the lower part of the housing but once this was done no further clearancing was required.

The underside of the transmission showing the mounting plate in position after it was modified.

Modified transmission plate in position for checking. So far so good, although the mounting plate will need to come out again and in future will be installed already bolted to the transmission—there is not enough room in this tight corner to drop the tranny into place; it will have to slipped in as a unit from the side.

With the transmission properly installed for the first time, it is obvious that the seatpost will need to be dimpled here for clearance with the lid. Unlike four-speed transmissions in early frames that need to be moved regularly for chain adjustment, this transmission will be bolted in permanently and chain adjustment can be taken care of inside the primary, so once optimum clearance is established it will stay that way.

Dimpling the frame is the preferred method of gaining clearance as no metal is removed from this important part and the subtle reshaping of the seat-post can be detailed prior to paintwork.

We now have suitable clearance with the transmission in its final location. It will not be tightened down to the mounting plate until the inner primary chaincase is snugged up into place at both the engine and transmission mounting surfaces. All contact points, four at the engine mounts and five at the transmission base, are checked to confirm that everything is home before tightening any nuts or bolts. This insures a stress-free fit of the chaincase and perfect alignment between the crankshaft and mainshaft.

For the set-up, special extra long versions of the front engine mounting bolts pass through the engine, through the frame, and through the machined spacers into the frame jig.

With the short engine installed and all fasteners in place but not torqued down, it is time to trial fit the inner primary chaincase. Just before we do this, this is a good opportunity to get the dimension from the exact centerline of the frame/jig to the edge of the rear belt pulley. We will need this dimension when it comes time to mount the rear pulley in relation to the hub.

Colony fasteners are used exclusively to assemble this project bike. Here we have an inner primary mounting kit, with all the exposed bolts chrome-plated and a new set of lock-tabs to prevent any internal bolts backing out into the primary chain; engine mounting kit in chrome with correct length of shank on the bolts and Nylock nuts; and chrome cylinder base nuts.

Due to the high quality of all the components used in this build-up, the inner primary lines up perfectly and can be tightened down in eight spots with the 5/16 UNC bolts supplied in the Colony kit. Engine and transmission can now be snugged down.

The three major components in their correct locations and bolted into place. Naturally this all needs to come out again for painting, plating, etc, so none of the lock-tabs in the chaincase have been bent up yet. At this stage the bike has a very compact yet lean look and it certainly has the potential to be an attractive machine.

Next issue we will complete the engine build, design and fabricate the top engine mount, and do all the machining required to incorporate the hydraulic rear brake/pulley combination into the rigid frame.

Make sure you check out this Knucklehead feature Part 3. 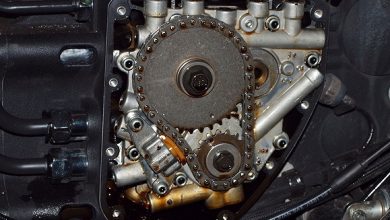