THE FIRST TIME I saw this bike was on a weekend run amongst a ton of bikes heading to the York Bike Show. It was parked up at the last meet point and it proved hard to go past the low stance and long pipes. Fast forward to out on the road and trying to catch the bike through the hills for a better look proved about as easy as watching your boss grind on the new office girl at the Christmas party. Hard. Turns out the bloke who built the bike was Mark Pannacchione, or Cheeky to his mates, and he built the bike to be ridden.

Mark started with a Softail Deluxe which he picked up absolutely stock standard with around 12,000 km on the clock. A pair of Freedom 36-inch duals along with a matching tune to liven up the mill got things going, but as per the norm, it didn’t stop there.

Keeping a more old-school look for the hoops, a pair of 40-spoke cross-laced rims were chosen using CNC’ed Double Diamond-back spokes for a twisted finish. A 21 x 3.5” front and a 16 x 3.5” rear were slid underneath after being wrapped in classic white-walled rubber.

Fully polished rotors and a chrome pulley complete with matching twisted spokes was bolted on using all chrome hardware. The brake calipers got a polish giving them at least half-a-chance of getting a look-in with all the extra bling of the wheels and rotors.

The tins were left standard along with the deep red and black paint, however, Mark had the pillion-pad holes welded up and also modified the tail-light opening to accept a tombstone tail-light. The tail-light housing was changed out for a Softbrake item which deletes the top mounted number plate lens. A Softbrake number plate relocation bracket was also used to pull the plate south of the tombstone. All-in-all they’re subtle but clever changes that clean up the rear between those fishtails perfectly.

The LOST reference comes out of Mark’s own business Lost Racing Products in Bibra Lake south of Perth. They supply performance hose fittings so naturally a full set of braided hoses was knocked for the bike. Very handy considering the extra length needed just in the brake and clutch lines to suit the 16-inch apes on top of the 1.5-inch risers. The mirrors were then dropped under the bars for a cleaner look.

The slammed stance is the result of some Progressive Suspension drop-in springs on the front with a let’s say ‘liberal’ approach to the recommended trimming lengths for the plastic preload spacers. This dropped the front further than most, but in Mark’s eyes, it was needed so as to tie in with the lowered Legend air-ride rear suspension and not look like it was towing the invisible caravan all day.

To finish off the bike, a ton of chrome was bolted and clipped on using standard Harley-Davidson Deluxe parts but mainly Kuryakyn covers. With that much chrome a detailing session probably takes the day but with results like this who, really cares. 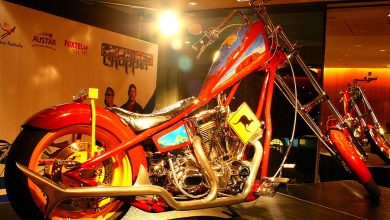 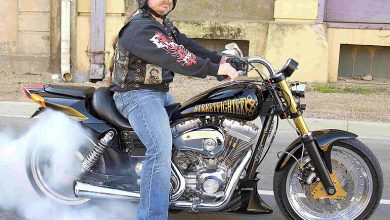 Street Fighter Down Under