I’M KYLE Smith, owner of Smith Concepts Custom Paint & Design (0403-889-455) in Brookvale. We do custom paint, pin stripping, air brushing and custom layouts on bikes and cars — we do any custom bike or car but we mainly work on Harleys — working hand-in-hand with a few panel shops from the Northern Beaches right over to the Western Suburbs by offering any sort of candy paint, metal flake, gold leaf, traditional signing options, and air brushing jobs. I’ve been in the business for about seven years; it was a hobby which turned into work.

Bikes have really gained popularity around this area — we are constantly working on V-Rods and custom bikes from not only the local guys but also guys from out west.

We don’t usually strip down and do the full bike jobs. I like to stay in the design and paint work that comes along with building a bike — the final stages. We work alongside a fabrication company that will fabricate and fit all the bars and accessories.

However, we did all the customisation on this bike.

Dave had the concept for the bike. He wanted high bars, to get it right down on its arse and as low down as possible to ride, but he also wanted to be able to bring it back up if he was going to take someone on it. It was always going to turn into a full house custom bike like all of his bikes that we’ve done before.

Dave chose the wheel option first — he wanted that in-your-face bling wheel package to start the thing off — so we built the bike up from them.

It’s Breakout with Roland Sands Design 16-inch-apes, riser kit with Burleigh Bars, custom braided line kit, CVO wheels which Dave got from Trivett’s when he bought the bike, and we installed a Shotgun airbag suspension kit in the rear.

It has chrome fork legs and a chrome CVO front-end, white walls for the low stance. and we pushed the forks through a little bit to get the front-end of the bike down.

The engine work was performed by APL Performance. It has an APL 107 kit which includes CP pistons, custom cams and Powerflow heads. It’s producing a stunning 140 hp and 120 ft/lbs of torque.

We did all the customising on the rear tail and fender to eliminate all the bulky parts that hang over the rear guard.

It’s had a full custom paint job and is all airbrushed over a pearl white base. Originally it was going to be a black and white bike to go with the club colours, but at the last minute we had the thought that it would give the bike a lot more flare if we put some candy over the silver airbrushing that we’d already applied. Dave and I came up with the colour which was a DNA custom mix between a blue and an aqua. We gave it two light dusty coats over the bottom part. Dave chose the pearl white that was applied with a black base coat on the bottom where it breaks up.

We came across the bars in America which are a little bit different from the Burleigh Bars that we normally source for his bikes; gave it a wider and tougher stance.

This is its debut feature shoot; it hasn’t been to any shows yet because it’s only been finished for about two weeks; it’s brand new off the press.

I’M A DANCER at Pure Platinum in the Sydney CBD and Dancers Cabaret in the Illinois Hotel on Parramatta Road; I’ve been dancing for about a year now.

I had a pole, I have the body, I love to dance around and party, so I thought why not try this out. I walked straight into a club and asked for a job and I got it on the spot.

My personality kills it; it really comes out a lot when I dance. I do a bit of modelling on the side too but I don’t think I could work full time; I’m too much of a party animal.

I’m a Sydney girl and I love it but I am looking at doing some travelling soon doing a strip around the world tour which should be fun. I love to go out a lot, though, so you’ll always catch me at The Club any given Sunday.

I am addicted to tattoos. I go every second week at the moment because I love them so much. I go to all different people to get them but currently I am seeing Jess at Inked up in Guilford and Brad Sharp at Stingers in St Marys. I’m really fun and out-going so I don’t sit there in the seat and cry about how much it hurts — I’m telling the artists what I was up to on the weekend and I’ll even stay back and have a drink them.

I have a cat named George but he is a little shit and I’m not happy with him at the moment because he thought it would be a good idea to claw my Channel bag.

I love what I do and I’m a lot of fun so if you want to contact me for work, I’m signed up with MAMM International or you can search me on Facebook under Erin Lee. 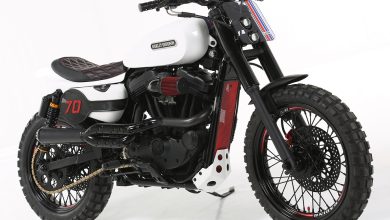 Harley Evo Gem at the Gym 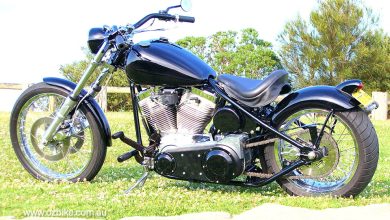