DAVE’S CUSTOM is a chopper, that’s for sure, but it still racks up the big miles, which has gotta be the case when you ride West Oz.

“I put 4000 kays on the thing before it was three weeks old,” Dave explained. Rode to Geraldton, Pt Hedland — all around there and it didn’t miss a beat the whole time. It’s got well over 12,000 kays on the clock now and I’ve only had to replace a rectifier and a detent spring in the gearbox, so I’m really happy with the reliability so far.”

Dave built the bike himself; he’s a bike and car mechanic by trade so it was no big deal. And it’s not his first Harley either, not by a long shot. He owned a WLA in 1969 and a Knucklehead after that.

“My first bike was a BSA Bantam when I was 15, and I had side-valve Beeza M21 singles after that,” says Dave, reminiscing. “I grew up on a farm in the middle of the Gibson Desert, down the Gunbarrel Highway 140 miles north-east of Willuna. Dad was a roo-shooter and I’d help him out and it always somehow involved riding bikes around the scrub.”

Most of the parts came from the USA via Mid West Motorcycles. “They’re okay to deal with, but strangely, there’s a language barrier, and you’ve got to learn their lingo if you want to receive the correct parts.”

Those correct parts included a 127 cube Ultima motor with 140 horsepower at Dave’s disposal, which is fed through the open primary to the Ultima six-speed box, all of which is supported by the Ultima chassis.

The front forks are eight-inches-over and hold the 21-inch front wheel at just the right jaunty position. An 18-incher rim to hold the 250 tyre in the right place completes the picture.

The sound comes courtesy of the 2-into-1 Vance & Hines exhaust system which is not too loud, not too quiet, but just right.

“I threw it together in just three weeks,” Dave boasts. “But the paintwork took six weeks alone to complete. My son-in-law, Lee Simmons, did the work, and he did a top job, mixing up a special pearl burgundy — which I like a lot — and the silver stripes just add to it.

“Pete the Sparky did a brilliant job on the wiring; that’s something I’m not real keen on doing myself. He took three nights to do it; the wiring was a killer — 120 wires on the bike; there’s a box in the system and there’s 60 wires coming out this end and 40 wires out the other and somehow Pete managed to find them all and join them up in the right order. It must have been right, as it all worked well, and still does.”

So Dave’ got himself a good-looking custom and does the big miles on it, but it’s a trophy winner as well.

“Yeah,” Dave says proudly. “At the Annual WA Hotrod & Street Spectacular, held at the Burrswood Dome Casino in Perth, we won Top Bike and it was competing against 16 other choppers so I was pleased with that. And then later it won Best Custom at the Rockers & Choppers Show in Fremantle, so it’s got some show as well as go.”

Minor details, Dave — just head for those long, straight roads around that big state of yours. 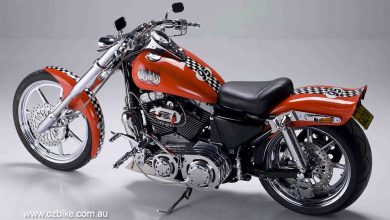 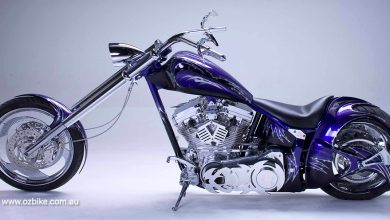 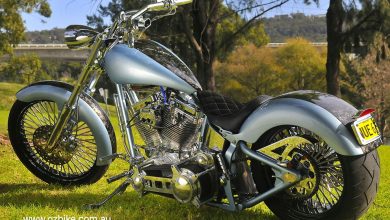