I STARTED off in a back garage in Parramatta, Sydney, with a Sportster that I bought as a basket case. I was a motorcycle mechanic by trade but I had to figure out how to put a Harley together and that was fun. I did my first rake—I had to heat up the backbone of the frame, cut the down-tubes. It was very dodgy but it worked.

I am sure I have bikes that people are showing around the place. I am sure I have built heaps of bikes that have won shows too — as to whether they have my name on them, probably not, but I have never been a fame hunter; it’s not my style. I think realistically your name speaks for itself.

This bike started off as a shop build and halfway through a customer came in and said, “I want that bike! How are you going to finish it?”

I told the customer what we were going to do and he said he liked it and made a couple of his own choices for it before agreeing on what I had already foreseen for the bike.

It has a 65 mm converted front-end with no rake on the triple-three. The 38 degree rake is actually in the frame. Traditionally, when you build something that you want to be a show stopper and an eye-catcher, you have always got to start from the frame; it’s your basis. This frame was originally designed for a 240 rear but I’ve converted it to 250. It’s supposed to be a 240 chain but I’ve made it into a 250 and used a 1 ½ belt.

The exhaust is Vance & Hines Big Radius which was the customer’s choice. He wanted that style of bike.

The 127 cube Ultima motor is powered by Edelbrock carbs which is what really makes it go.

I have had dealings with the States for years so I know a lot of people over there. Sam is the owner and the manufacturer of Ride Wright Wheels. He is a nice guy and absolutely always looks after us. The wheels are made by Ride Wright; they’re solid spokes.

The paintwork is pretty sensational. It’s a typical pearl paint in the flame work. Having a really long tank and being such a long style of bike, the flames accentuate the length and help follow the curves in the tank, guard, pipes and lines of the bike.

At the end of the day, you want to build something that the customer is going to be extremely happy with — and you won’t get much better than this.

Words by John at Metal Hogz; photos by Wall 2 Wall 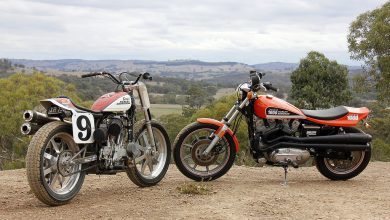 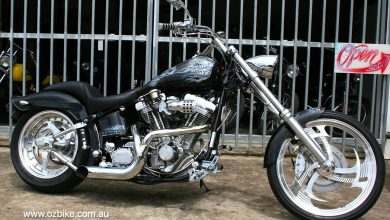