THE early days of a bloke’s life often influences all that follows—that was the case with Giles—his tearaway days of youth were spent travelling too fast on light and lithe Ducatis—so when he craved a custom Harley-Davidson, naturally it had to be simple, light and powerful.

“I’ve had a few Harleys before,” explained Giles, a long-time fireman and long-time biker, “but this one I really like; it’s built exactly how I wanted it. And it does remind me of the Ducati I owned so many years ago.”

Actually, if Giles needed inspiration drawn from the bikes of his own Good Ol’ Days, he had plenty of options—the list of bikes he owned as a youngster was widely varied. As a kid growing up on Sydney’s Northern Beaches he owned a BSA 650 Thunderbolt, a 1970 Triumph Bonneville, a new Kwakka 9 which cost him a total of $2159 way back in the 1970s (sounds cheap, doesn’t it, especially when you compare that with the $4200 he paid for a Kawasaki KX80 minibike in 1998 so his son Sam).

“That Kwakka was fast but handled really bad,” Giles reckoned. So he decided to get a real bike, a Ducati Super Sports—a horn bit of gear in anyone’s language.

In between the bikes, Giles travelled all over the world—Papua New Guinea, Africa, South America, England. The bikes included Moto Guzzi, BMW, Suzuki Katana, Harris Magnum, and even a Vespa Scooter while he was in London.

And then he got married and had kids and the last bike (for a while) was a Mike Hailwood Replica Ducati.

“I wasn’t without a bike for long but I’d lost my licence, so when I got it back, I figured I’d get a Harley, ride slow, play it cool and keep the licence.”

“My first Harley was an ’81 FLHS stripped dresser, and then I bought a 1991 Fat Boy which was an unwanted raffle prize,” said Giles. “An ’86 Softail followed but by then my son Sam was doing a bit of road-racing and I’d bought him a Buell. It was Metho Tom who convinced the young bloke to race a Buell, and he raced for the Blacktown Harley-Davidson & Buell team. That’s young Sam you see in the riding shots.”

It’s a cool Dad who lets his son loose on the custom Harley-Davidson.

“When Sam was doing his HSC, we couldn’t really afford to race the Buell so it went,” said Giles, “and that’s how I came to get this bike.”

A 96-cube S&S motor was purchased but the main impetus was a rigid frame Giles spotted in the corner of a shop. The brief was to build a lightweight, tough looking and good handling rigid with lots of power. After a few teething problems, Giles ended up with the machine you see here.

The S&S donk was mated to an S&S five-speed and joined together with a Roadmax 3-inch belt drive.

The frame has a 36-degree rake which suits the early Wide Glide front-end well. A RevTech 21 inch front takes care of the steering duties while a 17 X 5.5 inch rim down the back gets the power to the ground.

Andy at Albatross Engineering took care of the exhaust system, making the pipes and initially fitting a SuperTrapp muffler, but when that was damaged, a new custom muffler performed its noisemaking duties quite admirably.

But the best part of this custom rigid is the seat, complete with its own suspension system. It’s made by Chopper Shox and their proud boast is: ‘It will make your rigid ride like a Cadillac…’

“I had to stuff around with a fair bit at first,” Giles said, “but when I finally got the setting fine-tuned, it really makes a huge difference to the way it rides, compared to other rigids.”

Your author can vouch for that as Giles offered me a ride after the photo-shoot was finished, and yep, I gotta agree with him on that one!

“I’ve got to thank a few people who put in big time for the build,” Giles added. “Richard and Leigh Nicholls from Redgraves (02-9484-9900) were great; Andy from Albatross Engineering (02-9997-2863) for the exhaust; State Engineering for lots of little machining tasks; and a big thanks to Steve at Motorcycle Weaponry (02-9997-3929), my local bike shop, he managed to source a lot of very nice parts.

I’m very pleased with the way it turned out. I love riding it because it handles well for a rigid and has enough power. We might have to take it out to Western Sydney International Dragway to see what it does…”

It’s funny how things happen when you’re shooting a bike in a public area, you often get onlookers and we got a few once we had Giles’ bike parked up on Mona Vale headland. One good-looking onlooker was the very yummy Martina who didn’t need much coaxing to throw a long leg over the black rigid and pout up. Thank you Martina, with your lovely smile, pretty face and oh-so-sexy French accent, you made us forget about all your mates doing that nuclear testing in the South Pacific.

Giles was way too shy to get in the riding shots so he delegated the duty to his son Sam who used to ride a Buell for the Blacktown Harley-Davidson and Buell Racing Team. Watch this space, as the father and son team are looking at another field of two-wheeled endeavour. Drag racing is the next most likely candidate. With a genuine throttle-jockey launching a very powerful, very light rigid, things should get interesting. 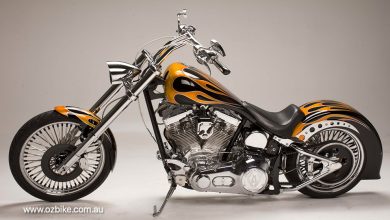 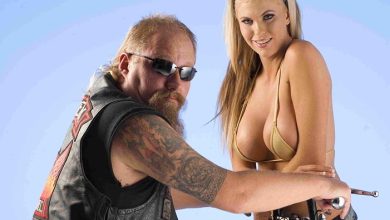 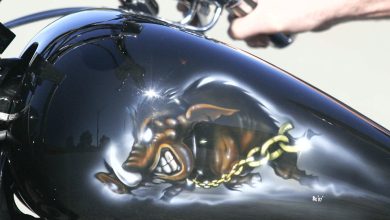 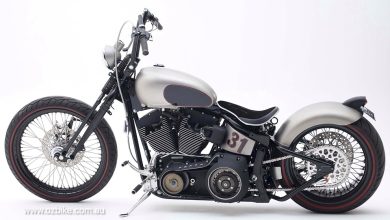