I WAS visiting Windsor Harley-Davidson when this sexy beauty caught my eye. Well, you just can’t ignore an arse like this no matter how decently you try to avert your eyes. You’ll always end up staring at it! Hey, don’t take me wrong, I don’t have anything against fat arses, on the contrary, I appreciate their qualities, and as the saying goes, “The bigger, the better!” And trust me, this 300 wide arse is just up my alley. Man, she turned me on!

Mick doesn’t object. “I will tell John when he comes in,” he says.

“Righto,” I reply, disappointed. My dick goes limp as sometimes it takes weeks to arrange a shooting.

I change the topic, but after the while I get another idea: “What about we make it a surprise for John?” I ask. “Can you imagine his face to sees his fat arsed bike in Ozbike?”

Mick likes the idea. “Yeah,” he agrees, “he might get the surprise of his life! When do you want start shooting?”

“It wasn’t ready then!” Mick answers.

I had wet dreams all night, and the next day, early morning, we start the shooting and she poses like a salted pro!

The bike was originally a 2000 Harley-Davidson Heritage but John had something else on his mind when he rolled her into Windsor Harley. The guys at Windsor Harley sat down and took notice of what John wanted them to do, then they started to apply some cosmetic surgery, however, instead of trendy liposuction, they added some fat to her backside till they got the proportion John was after.

Most of the work has been done by Mick The Spanner, although Mick The Boss and Timmy The Apprentice did lend their hands to the cause.

As you can see, the girl’s prominent feature is her sexy fat arse but the plastic surgeons did some work on her face too. Tell me, isn’t it true that a woman with a nice arse doesn’t need a nice face…

The mascara, I mean the paint, was laid down by MBK Auto Refinishing. When I saw her for the first time I thought she’s a black girl, but under the sunshine, her purplish tint similar to ‘blood dust’ puts her in totally different category. I also notice some subtle micro pieces inside the paint that make her even more attractive with a kind of three dimensional look.

The rear guard was manufactured by Windsor Harley and complimented with a Long Boy front guard. The fuel tank was stretched 2 inches to give her a lean and mean look.

Zodiac was responsible for the headlight, forward controls and the number plate holder with brake light.

To accommodate the huge rear wheel, the gearbox was relocated to the right and the rear sprocket got double usage as a brake rotor. It’s just bloody mad!

The stock front-end was replaced with a chromed unit with raked Tribal triple trees.

Both sexy wheels are the artwork of good DNA, as are the brake calipers. Speaking of DNA, I always say look at the mother before you marry her daughter… that’s why I’m still single.

Riding this bike is like dating those fabulous XXXXL ladies with the attitude, “I don’t give a fuck what you think about me!” If you’re like me, then John’s Jumbo Arsed Joy will make your day as it made mine. 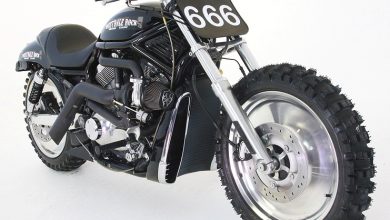 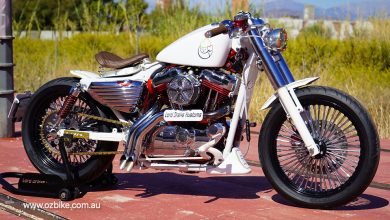