Volume l of A Century of Motorcycling contains more than 700 photographs from the scrapbooks of two AMA (American Motorcycle Association) Hall of Fame honorees, Fritzie Baer and Erle ‘Pop’ Armstrong.

Erle Armstrong and Fritzie Baer inducted into the Hall of Fame in 1998.

Born in 1901, the same year that Indian kicked off, Fritzie Baer was the consummate motorcyclist, unfortunately, amongst this huge collection of photographs and articles, there is no picture of his first motorcycle which is believed to be a 1915 Indian. This machine was purchased by Fritzie at age 15 with money borrowed from his brother. By 1919 he was working at the Indian factory and his lifelong relationship with the Indian marque had well and truly begun.

Fritzie and the gang at the Indian (Hendee Manufacturing at the time) Factory.

Fritzie continued on to be an active rider, racer, hill climber, Indian dealer, factory representative, announcer, referee, promoter, and was renowned for his ability to write motorcycle news stories and get them into the newspapers.

Erle Armstrong was a few years older than Fritzie, born in Illinois in 1888. At 16, after moving to Denver, he took up bicycle racing at which he excelled and soon became Colorado state champion.

That same year he lost his father and now, as the bread winner, he started a motorcycle delivery service for a dry goods company. Keen to get involved in motorcycle racing he borrowed a single-cylinder Thomas motorcycle and got started.

Erle on his first Excelsior racer.

In his first meet he took the 5, 10 and 25 mile events in record time. Erle went on to become a very successful motorcycle racer as the collection of photographs goes on to show. It was through the racing program that friendship between these two guys grew.

Erle on the outside strutting his stuff.

The huge amount of material in this book was collected by Fritzie Baer and stored in boxes which he continually added to. The enormous job of sorting and compiling it all was done by his two sons, Butch and Tom, with a lot of help from sisters, Barbara and Christine; an effort that took quite a few years.

The book is filled with page after page of fabulous old photographs, brochures, entry tickets, factory literature, plus lots of family shots, weddings, kids, and even the family pets.

A photo sent to Fritzie by Joe Petrali, Howard Huges co-pilot on the Spruce Goose and Harley-Davidson legend.

Looks like two Harley riders at a motorcycle polo match.

Yes, they really did play motorcycle polo—a copy of the official program for a Monday evening match at the Arena in 1932 with Fritze Baer as referee.

Albert Wolfe on ½ mile race track in Hatfield, Pennsylvania. This image is still, to this day, being used for race posters.

Doing what he did best, Fritzie Baer announcing at the Springfield Mile.

Volume I ends with the United States entry into World War II and the beginning of fuel and rubber rationing and the rapid decline of motorcycle racing.

In Volume II, which will follow shortly, we can continue to see the growth of both families as they join in the sport of motorcycling for the rest of the century.

This fascinating hard cover book compiled from the scrapbooks of Fritzie Baer and fellow motorcyclist and friend, Erle ‘Pop’ Armstrong, is available from Redgrave Motorcycles: 02-9484-9955. 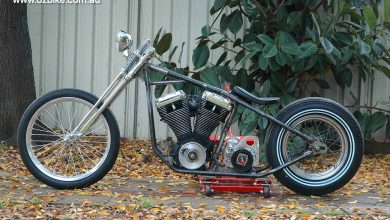 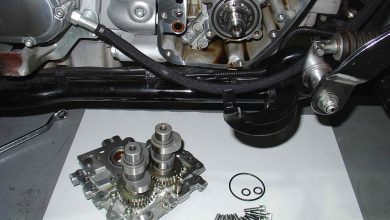